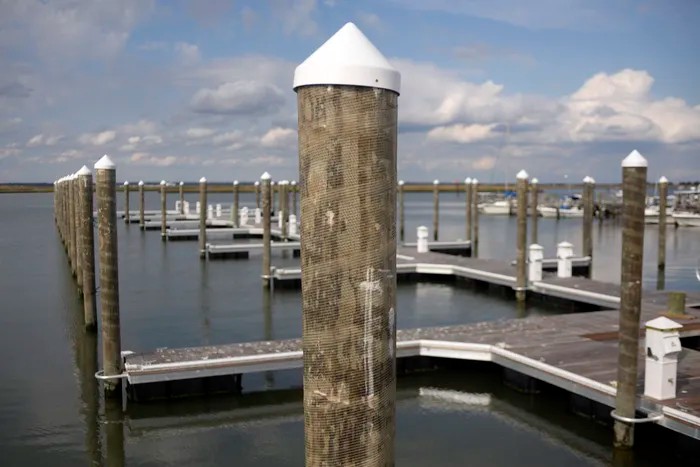 MARGATE, N.J. – The old saying that calm seas never made a good sailor may apply to Salvatore Calabrese when it comes to operating his family’s bay-front Blue Water Marina, which was nearly washed away by Hurricane Sandy.

Two years and more than $1 million later, Calabrese has weathered the storm after the storm: a series of challenges and setbacks including spending $100,000 just to remove debris from the site and finding adequate funding to complete the rebuilding. The marina is set to fully reopen in the spring.

After Sandy took away two of the marina’s three wooden docks, the business limped along last summer with only one operational dock and about two dozen boat slips. When it reopens April 1, Blue Water will have 47 functioning vessel slips and, for the first time, will be able to accommodate boats up to 40 feet long.

“It’s been an incredible struggle from the moment I found out what happened, long periods where I completely doubted myself . . . that we could ever get this thing going again,” said Calabrese, 49, who was at home in Wayne, Montgomery County, when he got the call from a boat-slip renter that a significant portion of the marina was gone.

“I really only had two choices: Face bank foreclosure or rebuild the marina,” said Calabrese, who also operates an orthopedic-design and -distribution business in the Philadelphia area.

So Calabrese, like a significant number of coastal business owners, dipped into his personal savings, used insurance proceeds, applied for government grants and loans, and eventually obtained a new mortgage to keep his Shore business afloat.

The marina, which he and his wife, Amy, have owned for 11 years, is among thousands of businesses up and down New Jersey’s coastline affected by Sandy, which swept through Oct. 29, 2012, bringing 80-m.p.h. winds and a seawater surge. A 13-foot wall of water breached Margate’s seven-foot beachfront bulkhead and flooded most of the resort under 10 feet of water.

Sandy, which stretched across 24 states, immediately became a new benchmark for disaster along New Jersey’s 127-mile coastline, causing more than $38 billion in damage and displacing 380,000 residents. Outside the Garden State, 159 people were killed, and 660,000 were left homeless.

The storm made landfall just north of Margate, in Brigantine. The counterclockwise action of the waves and wind created the water surge that caused massive flooding along most of the coast. Areas north of the storm’s eye – along the northern sections of the Shore – sustained the most damage. The ferocious storm chewed through beach towns like Mantoloking and the Ortley Beach section of Toms River, where entire neighborhoods were washed out to sea.

“It was rough going for a lot of these businesses, which are seasonal businesses for the most part, so they face special challenges to begin with,” said Diane F. Wieland, director of Cape May County’s Tourism Department.

The federal Small Business Association has approved 1,719 loans in New Jersey since Sandy, totaling $197 million. According to the most recent figures available, the state “Stronger New Jersey Business Grant Program” – widely criticized by business advocates for not releasing money fast enough – has given out about $11.5 million in grants to hundreds of businesses in the four Shore counties of Monmouth, Ocean, Atlantic, and Cape May.

But Wieland says that two years after Sandy, nobody even talks about the storm anymore.

“Everybody just keeps moving forward – there’s not looking back or bringing it up anymore,” Wieland said. “People around here just want to believe we’ve moved past that, and we’re not going to dwell on it.”

Proof the region might have done that may lie in the numbers: Collection of Cape May County’s occupancy tax on room rentals for June and July 2014 – the latest dates for which numbers are available – increased $280,000, or about 5 percent over the same period the previous year, Wieland said.

“Certainly, Sandy forced some enterprises out of business for good. But I think, ultimately, the storm forced a lot of businesses along the Shore to re-create themselves,” Wieland said. “They had to pick up the pieces of what Sandy left behind and move on to bigger and better things. And many did.”

Among the largest thriving downtown centers in the state is Ocean City, with six blocks of more than 100 stores, boutiques, and galleries lining both sides of Asbury Avenue, Gillian said.

“Two years later, we only have four storefronts that are still under renovation and have not reopened,” she said. “But those are expected to be open by this coming summer.”

After a disaster, as many as one in four small businesses is forced to close, said Gail Moraton, business-resiliency manager with the Insurance Institute for Business & Home Safety, based in Tampa, Fla.

“A key to survival for a business after a disaster is how it responds to that disaster and how quickly it can reopen after a devastating loss,” Moraton said. “When businesses don’t reopen, it’s usually a combination of things, but at the top of the list is usually that they weren’t prepared and didn’t have a contingency plan in place.”

To that end, the Insurance Institute recommends all small businesses – no matter how tiny – have a continuity plan that will allow their operators to function in even the most dysfunctional circumstances.

“The most important thing for a business to know is what the risks are,” Moraton said, “so they need to first and foremost assess the risks, both natural and man-made, and then prepare for them.”